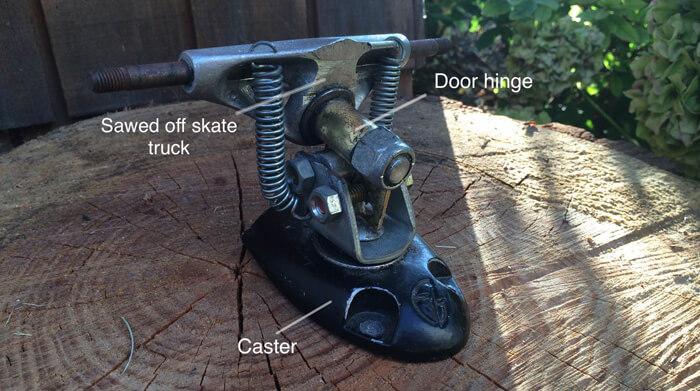 By SurfSkate CanadaFebruary 7, 2015No Comments

“When I was about 15, (2005) I was a sponsored longboard rider. I’d spend many days making downhill/slide videos when the waves were flat, but my true passion was surfing. I noticed that all the longboard companies were marketing their boards as surfing cross trainers; saying that their board, with their truck set up, felt like surfing. But I never agreed with that. Making turns on a surfboard felt way different than standard skateboard trucks; whether they had reverse kingpins or springs instead of bushings, they didn’t mimic the same movement or feeling of surfing. So I began to think about how to build a board that really mimicked the movement of surfing. A little while passed and I didn’t try building anything. Then one day I found my skateboard in the street run over… by my friend who just got his license. The deck had snapped and one of the trucks had cracked in half. So, skateboard-less, I decided to take those parts and make my own skateboard, one that had that surfy feeling.

A surfboard has three basic components: surface area, fins, and rail shape. I thought about how a surfer turns their board by using their upper body, twisting, and leading their board in a chosen direction. You cannot simply put toe side pressure on the rail and expect the board to turn in that direction like a skateboard would. The skateboard would have to have complete free motion of the front so that the rider could use their upper body to move in any direction they want. The free motion of the front would also allow a rider to pump for speed. The back would have to work as your pivot point, like the fins on a surfboard.
So in my garage I began building a free motion version of a skateboard truck with some parts lying around the house. I used a caster for full 360 degree horizontal movement than attached a spring loaded, sawed off skate truck to a door hinge to make 60 degree vertical movement. You can see what it looked like in the picture above. After a couple years of fine tuning, the V-Truck was born.”

-Colin, the designer of the SurfSkate

We use cookies to ensure that we give you the best experience on our website. If you continue to use this site we will assume that you are happy with it.OkPrivacy policy